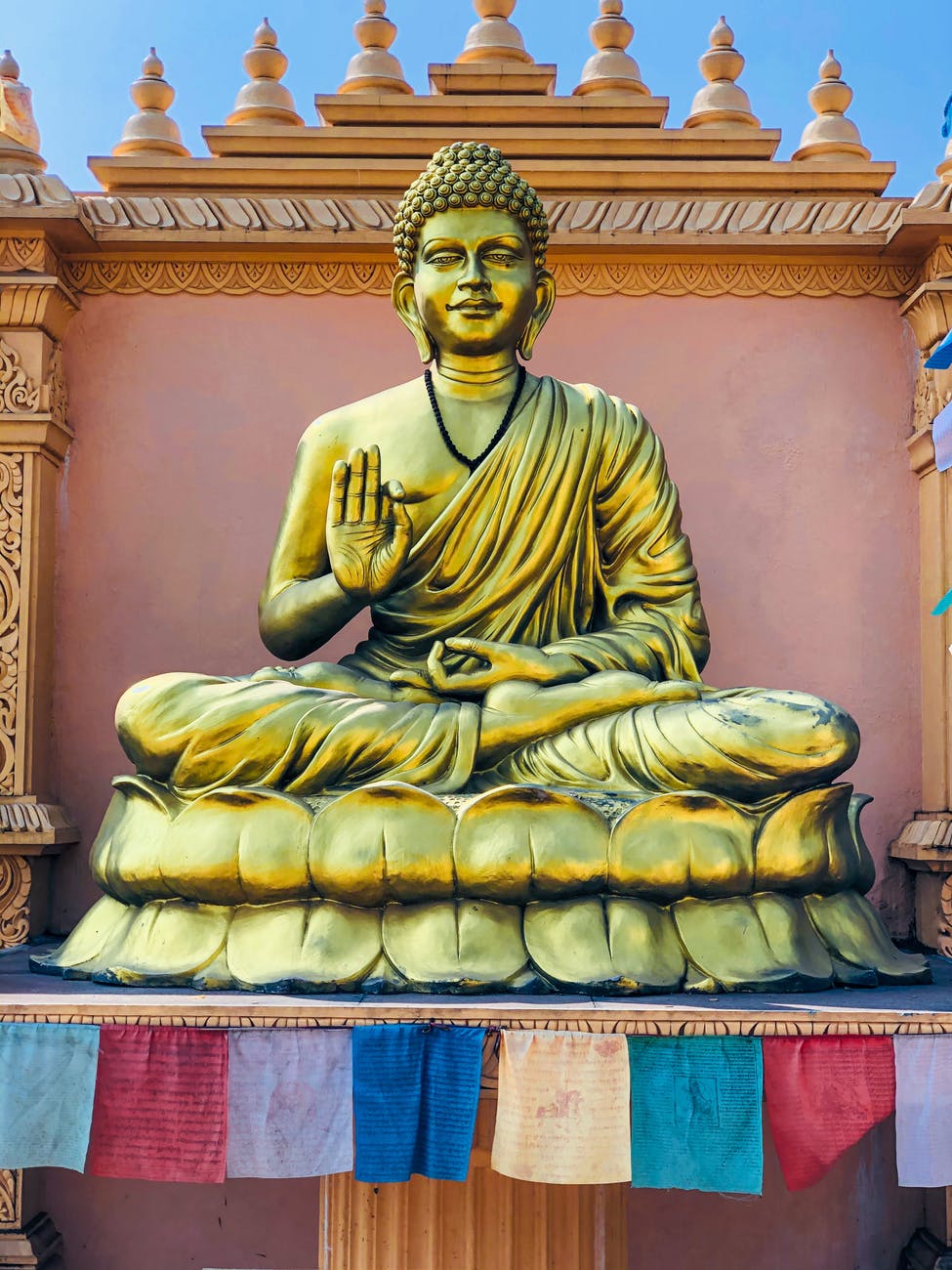 Over 2500 years ago  Shakyamuni Buddha taught for 45 years in the Ganges River basin of north-east India to many types of followers—from beggars to kings, to monastics and lay men and women. It is said that the Buddha taught 84,000 different Dharmas to help beings free themselves of the suffering of worldly existence caused by the 84,000 different afflictions. A council of 500 arhats was convened immediately after the parinivana of the Buddha by the Venerable Mahakasyapa. During this meeting Venerable Upali recited the monastic rules that became known as the Vinaya while Venerable Ananda recited the Sutras. For 400 years the teachings were only transmitted orally.

The Jetavanaramaya Stupa built in the third century as part of the Jetavana Monastery in Anuradhapura, Sri Lanka. At 400 feet, it was one of the tallest structures in the ancient world, with only two (the Great Pyramids of Giza) being higher.

In 326 BCE, several hundred years after the Buddha’s death, the Sangha divided into two schools: the Mahasanghika or majority who wanted changes and the Sthaviravada who were opposed to any changes. A hundred years later the Sthaviravada further divided into the Sarvastivada and the Vibhajyavada. The Sarvastivada migrated into northern India in the Kashmir region while the Vibhajyavada flourished in the Ganges River valley under the great Buddhist King Ashoka. In 247 BCE King Ashoka (272-231 BCE) sent his son, the monk Mahinda, and his daughter Sanghamitta, a nun, to Sri Lanka to establish Buddhism there.

By the first century CE there were 18-20 different schools, each with its own version of the Buddha’s teachings. Two written versions remain, at least in part: that produced in Sri Lanka in the ancient language of Pali by the Tamrashatiyas and known as the Southern Transmission and a Sanskrit version from the Sarvastivadas known as the Northern Transmission. These became known as the Tripitaka or three Baskets of the Vinaya or code of rules for monks and nuns, the Sutras or collections of instructional discourses of the Buddha and his closest disciples, and the commentaries that included the Abhidharma, which consists of the extracted and systematized philosophy implicit in the teachings. The Southern Transmission remains as the Pali canon and is followed by the Theravada in Sri Lanka, Burma, Thailand,and other south-east Asian countries. Although only fragments remain of the Northern Transmission in its original Sanskrit, it was translated into Tibetan and Chinese and many of these translations remain. The Tibetan transmission was also translated into Mongolian while the Chinese transmission became the basis for the Korean and Japanese scriptures.

The Buddha started the Mahayana teachings and predicted that great adepts would emerge to revitalize the tradition and explain the teachings that were not yet understandable to the majority of followers. Mahayana Buddhism arose during the 1st or 2nd century BCE from the Mahasanghika. It replaced the concept of the arhat with that of the bodhisattva as the highest ideal of Buddhism. The main difference being that the bodhisattva seeks enlightenment in order to help others, while the arhat is primarily concerned with his own salvation. The mahayana also grew out of the growing lay movements since most of the focus on early Buddhism had been on the monastic communities, although the great mahayana teachers were  also monks.

The Buddha himself was keenly aware of the limitations of words in respect to expressing spiritual reality. There is a famous story of how the Buddha held up a flower before the assembly of monks and smiled, saying nothing. The monks were confused by this. Only the Venerable Mahakasyapa responded, indicating that he understood that the truth is beyond words and doctrine.

The earliest and best-known mahayana scripture is the Prajnaparamita Sutra compiled by the master of the Madhyamaka or “Middle Way” school, the great Mahasiddha Nagarjuna, at the beginning of the Current Era from earlier works and various doctrines expressed by the Buddha while He taught in His nirmanakaya form. The well-known Heart Sutra and the Diamond Sutra represent the essence of these teachings.

Much of the Vajrayana or tantric Buddhism was transmitted by Vajrasattva and other Holy Beings in their sambhogakaya embodiments, although Shakyamuni Buddha started the teachings late in His life and predicted the later teachings. By the time of Nagarjuna there were adepts whose realization was high enough that they were able to communicate directly with these sambhogakaya beings. The basic esoteric teachings Shakyamuni Buddha transmitted directly to His son, Rahula. It is a very, very quick way to achieve realization. If, and only if, you have the opportunity to follow a true Vajra Master can you realize Buddhahood in a single lifetime using this method. It is a highly concentrated form of Buddhism. It gives you many supernormal powers. Only highly qualified people can receive this. Actually, for most beings, it is easier to realize Buddhahood in this life than in heaven. In the higher realms, you may not even have a body, but only consciousness. Life here is very difficult with much pain and suffering. This provides the motivation and the raw material for transmutation and realization. Many humans do have the good fortune to be able to pursue spiritual development, something that is not possible in the lower realms as hell beings, hungry ghosts, or animals–or in unfortunate human births.

Vajrayana Buddhism was well established by the seventh century of the Current Era (CE). Its methods evolved from the tradition of the spiritual sadhus, yogis who wandered around India who were adepts in tantric practices designed to provide realization, but, as previously noted, the teachings themselves originated with Shakyamuni Buddha. The source of all these teachings comes from Dorje Chang Buddha who manifested as Dipankara Buddha and taught them to Shakyamuni Buddha in another realm. It reached its peak in Tibet where it also assimilated the indigenous shamanic Bon religion, incorporating the local deities as protectors of the dharma. Vajrayana Buddhism is based on the secret teachings of Shakyamuni Buddha which were only transmitted to very high adepts and higher beings who, in turn, transmitted them to certain highly evolved humans when the conditions were right for them to be received. There were even certain humans like Tilopa, Sukasiddhi, and Niguma who reached a level of realization that they could learn the dharma directly from Dorje Chang Buddha. The aim of this form of Buddhism is to transform one’s body, speech and mind into those of a fully enlightened Buddha by special yogic means, including a variety of ritual and secret methods. In tantra, everything is vested with cosmic energy. For example, sounds or mantras can produce powerful spiritual effects and, as modern science is just beginning to discover, physical effects as well. Likewise, movements like prostrations have a ritual significance as well as a physical and spiritual impact.

Tantra requires the initiation or empowerment of a qualified teacher or master who provides specialized teachings, rituals, and practices to enable the disciple to root out or eliminate the dark side of his/her psyche and thus become like the Bodhisattvas and Buddhas. Supernormal powers that are viewed as the natural outcome of realization are used by qualified teachers. However, ordinary disciples are not allowed to discuss or display their supernormal powers. Only very highly evolved Bodhisattvas and Buddhas dare to display such powers and then only to help living beings. A person seeking initiation must demonstrate an understanding of emptiness, exhibit high moral conduct, and have developed an altruistic desire to help all beings. It is believed that any empowerment will have limited impact without a proper foundation of preliminary practices or Prayogas. These practices may have been performed in previous lives as well as the current one. It recognizes that supernormal powers cannot be given to one who has not eliminated the negative aspects of the self.

Even today, the Highest Tantric teachings and practices are only transmitted orally and are held in great secrecy between the teacher and the disciple. Because of the power of these teachings, it is recognized that the student must be thoroughly prepared to receive them. A true master will usually test a disciple for six to twelve years or longer before transmitting the higher teachings.

View all posts by steve1658

3 thoughts on “History of Buddhism”

My Dog Becomes a Buddhist

My Dog Becomes a Buddhist Regina Chang Hua Zang Si is a temple in the United States that propagates the dharma of H.H. Dorje Chang Buddha III. I have been a disciple at Hua Zang Si since I was in middle school. As a young adult, I gained valuable wisdom and experience attending temple with my family.… END_OF_DOCUMENT_TOKEN_TO_BE_REPLACED

Giving thanks can make you happier

Giving thanks can make you happier Each holiday season comes with high expectations for a cozy and festive time of year. However, for many this time of year is tinged with sadness, anxiety, or depression. Certainly, major depression or a severe anxiety disorder benefits most from professional help. But what about those who just feel lost or… END_OF_DOCUMENT_TOKEN_TO_BE_REPLACED